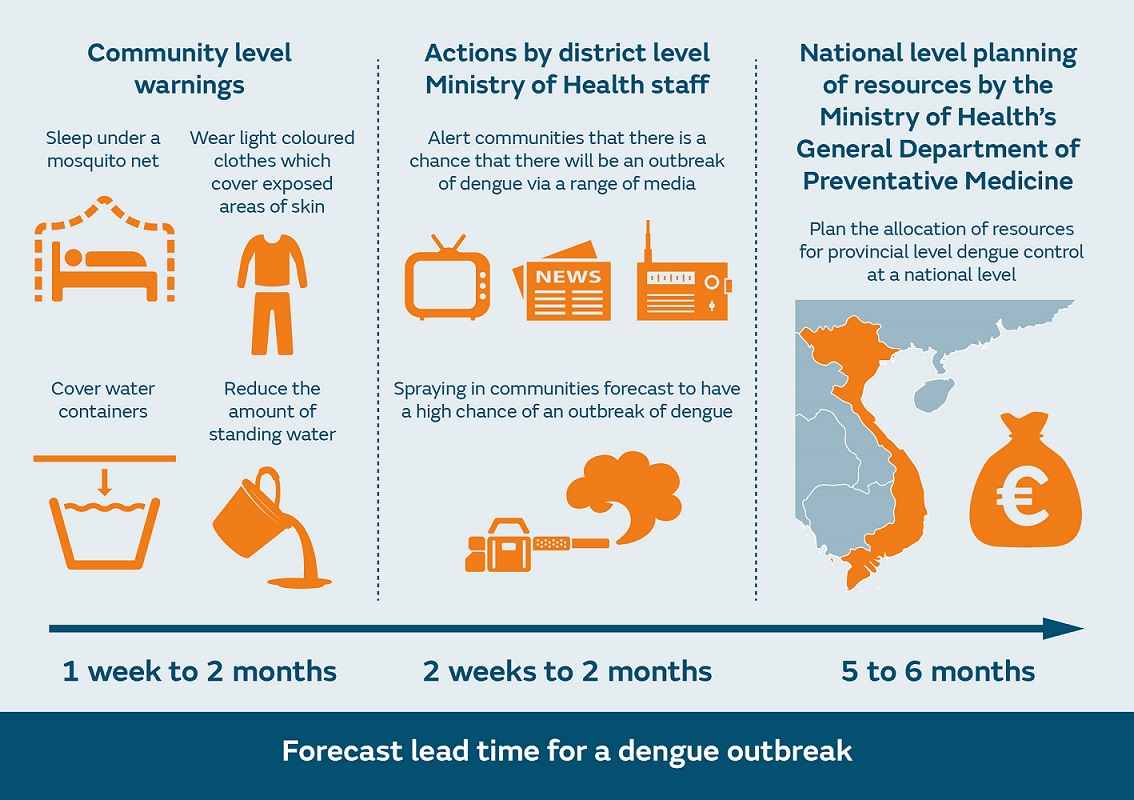 Dengue is the fastest spreading mosquito-borne viral disease in the world. About half of the world's population is at risk. There are an estimated 100-400 million infections each year, with Asia representing ~70% of this.

There is no specific treatment for dengue/severe dengue. But early detection of disease and access to proper medical care lowers fatality rates of severe dengue to below 1%.

The spread of dengue is regulated by the climate. For example, temperature and humidity influence many aspects of the biology of mosquitoes including their development, survival and biting rate. These variations interact with other factors such as demographic and socio-economic conditions that can alter the local disease prevalence significantly. If these factors can be monitored and predicted, then this allows outbreaks of dengue to be forecasted.

Since 2018, a project, under the UK Space Agency’s International Partnership Programme, led by Oxfordshire-based HR Wallingford, has used Earth observation data to develop an early warning system for dengue outbreaks in Vietnam.

D-MOSS is a dengue forecasting system, co-designed with stakeholders from the Ministry of Health, the World Health Organization and the United Nations Development Programme. D-MOSS predicts the likelihood of future dengue outbreaks up to six months in advance, for the entire country at a provincial level. This information has been used to facilitate early action to control and manage dengue outbreaks.

Authorities on the ground can strategically plan timely interventions, moving precious resources to where they are most effective. These might include:

The application of D-MOSS in Vietnam has confirmed that it provides suitably accurate forecasts of dengue outbreaks. It’s a reliable and cost-effective solution.

D-MOSS shows that there is a large untapped potential for developing tools that link space technology and public health applications. Many high-quality satellite Earth observation data products are freely available, which enables this development.

D-MOSS’s architecture and modular design ensure it can be replicated in other countries, be that in South-East Asia or other countries around the world. Owing to its success in Vietnam, prototype D-MOSS systems are now being implemented in Malaysia and Sri Lanka.

“We are beginning to see that D-MOSS has helped policymaking officials to develop dengue prevention and control strategies in advance of an outbreak, and to contribute to reducing dengue cases and mortality rate.”

Find out more information about this project: