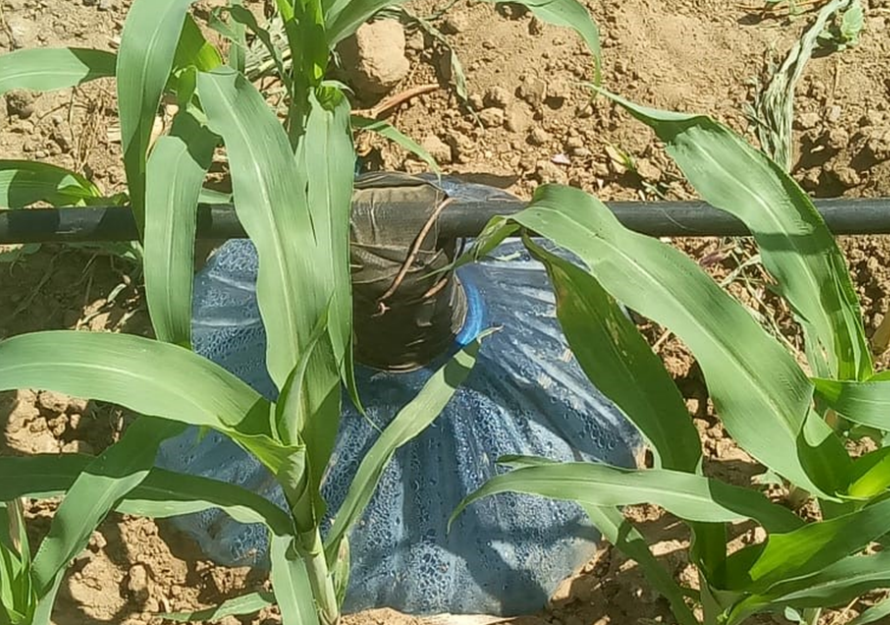 In parts of Kenya, people have long suffered from food insecurity caused by scarcity of water and frequent drought.

Turkana County is one area within Kenya affected by these issues. Like the rest of Northern Kenya, the hot and arid climate inflicts hardship on its people. They must turn to food aid when they would normally depend on their livestock for their livelihoods.

Farming, livestock, and new tree planting (afforestation) here mostly depend on limited supplies of borehole water and other underground sources. However, much of this water is brackish (salt water) and harmful to animals, humans, plants, and soils.

A UK-Kenya research team have come up with an affordable, easy to build and maintain solution. Not only will it meet basic needs (drinking water and food) but also empower the population by enabling the practice of horticulture or agro-forestry.

The team used water bottles buried in the soil, except for their topsides which are left exposed to the sun. The bottles contain the brackish water, which is evaporated by heat provided by the sun and hot soil.

This resulting vapour reaches the soil and plant roots through holes at root level but above the water surface, leaving harmful salts behind.

Field tests showed that a crop of dual-purpose sorghum (a cereal grain for animals and humans) could be grown using this technique, and that the results were improved further by adding moisture-retaining materials to the soil such as organic mulch in the form of banana leaves.

‘Made-In-Kenya’ solar-thermal desalinator was also built by the team. It is a device that concentrates the light from the sun to boil away water. The vapour is then condensed into freshwater.

The device is intended to provide 10 – 20 litres per day, enough freshwater to meet the drinking water needs of a typical household.

Following the completion of the project, further funding from the Scottish Funding Council/GCRF enabled further data to be obtained from test fields, confirming effectiveness of the method and providing a basis for models that will further improve the design.

Enhanced Food Security and Afforestation through Novel Approaches to Irrigation