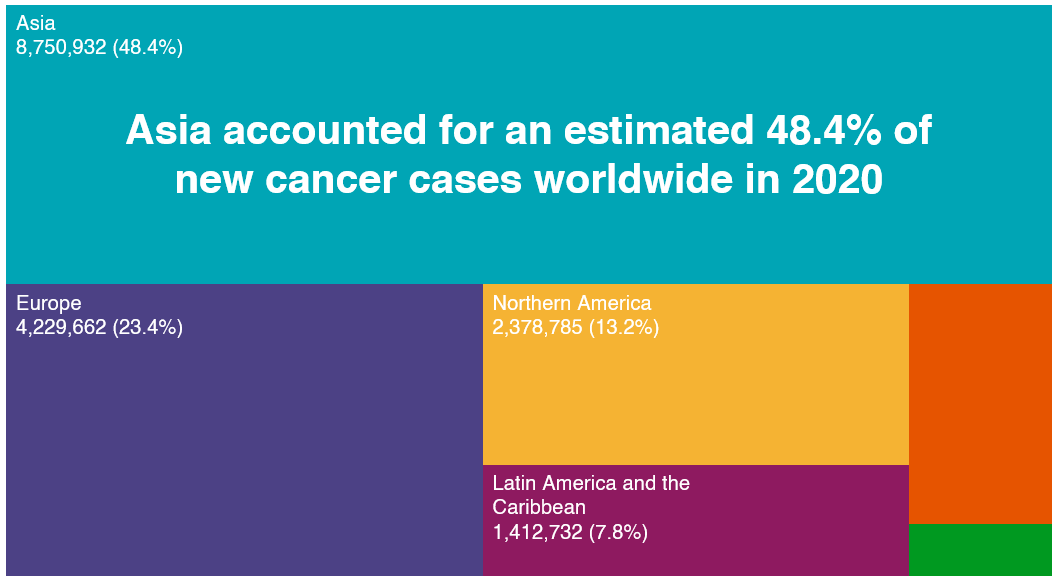 An estimated 8.7 million Asians had cancer in 2020. That's nearly half of all new global cancer cases. Despite this, people from Asia feature in less than 10% of cancer research.

Asia is one of the most diverse regions in the world. To ensure that patients in Asia receive the best diagnosis and treatment, it is essential that research considers the ethnic differences between people that have cancer.

Scientists are now using DNA sequencing to better understand how cancer develops in people. It provides insight into the combination of genetic mutations that can trigger or encourage cancers to develop. This is needed to improve how cancers are diagnosed and treated.

In 2017 Cancer Research Malaysia partnered with UK institutions to learn more about Asian cancers, with funding from the Newton-Ungku Omar Fund. Since then the teams have made important developments and delivered promising results.

Take oral cancer. It is the most common type of head and neck cancer, and it is particularly prevalent in Asian countries.

Although survival outcomes have improved over the past 20 years, still only 60% of people with oral cancer will survive for five years or more.

Researchers at Cancer Research Malaysia and Wellcome Sanger Institute are trying to improve patient outcomes by identifying which genes cause oral cancer cell growth. They have gathered data on the genetic make-up of oral cancer in Asian people and will use this information to screen for potential cancer drugs. Their aim is to design new treatments for head and neck cancer patients which can kill cancer cells while sparing normal healthy cells.

Another partnership paying off is between Cancer Research Malaysia and the University of Southampton. They have developed a new vaccine for head and neck cancers. It works by training the body to mount an immune response against the cancer cells.

The vaccine has already been patented and licensed to Touchlight Genetics, a London-based biotechnology company. The company used a cell-free manufacturing method, which reduced the time to develop the vaccine.

Every cancer is different. Each cancer patient needs tailored treatment to cope with it. Using this process has also allowed for the vaccine to be personalised.

The team are nearing the end of the first stage of their study. Their next step is to launch a clinical trial, which will involve testing the vaccine on head and neck cancer patients.

Breast cancer is the most common cancer in women worldwide. In 2020 Asia accounted for over 45% of global cases.

In collaboration with the University of Cambridge, Cancer Research Malaysia has recently completed the largest genomic map of Asian breast cancers.

Genomic maps are used to identify and record the locations of genes. In practice they resemble a straight line, with ‘landmarks’ dotted at irregular intervals. A landmark includes combinations of letters and numbers that represent a gene.

Scientists produce genomic maps with blood and tissue samples. DNA is extracted from the samples and analysed for unique genetic patterns. The patterns help scientists to build a picture; to identify specific genes that can cause cancers to develop.

The team’s research has increased the proportion of information worldwide on Asian breast cancer from 2% - 20%. It has shown that ethnic differences between people can influence how cancers develop. And that differences exist. How cancers develop, and whether patients survive, varies depending on whether people are of Asian or European descent.

This information has already been used to launch an immunotherapy trial in breast cancers. It will be used to launch a second trial in the next few months, which will use the genomic map to delve deeper into how genetic data can be used to predict cancer development.

Less than 5% of genetic information used in breast cancer research in recent years was from Asian people.

In their cancer prevention and population science programme, Cancer Research Malaysia worked with the University of Cambridge and Nottingham University Malaysia to evaluate a risk assessment tool called the Polygenic Risk Score.

Calculated using large-scale genomic studies, the Polygenic Risk Score is used to predict a person’s chance of developing a disease.

Due to a lack of data in Asian populations, it was unclear if the Polygenic Risk Score was effective in predicting breast cancer risk in non-European populations. Up to now, most genomic studies have examined people of European ancestry.

The results of this research have shown similarities between Asian and European populations. In other words, a Polygenic Risk Score based off European data can be used to predict cancer in Asian women. It also works effectively across women from diverse ethnic groups in Asia.

These results will help women decide which screening and prevention is right for them. It will reduce inefficiencies, costs and possible harm caused by over-diagnosis.

These projects show how powerful science partnerships are in tackling health challenges, but also expose the gaps in knowledge when it comes to research involving Asian people.

The Newton-Ungku Omar Fund is a catalyst for producing and promoting significant science research outcomes. This could help influence policy to improve health systems and the lives of those afflicted by cancer, especially in low-to-middle income countries.

These projects were funded by the Newton-Ungku Omar Fund through the Medical and Health Research in Non-Communicable Diseases (NCD) call by the Medical Research Council (MRC), in partnership with the Academy of Sciences Malaysia (ASM) and the Malaysian Industry-Government Group for High Technology (MIGHT).

Ekaterina Edham is Programme Officer for the Newton-Ungku Omar Fund, based at the British High Commission Kuala Lumpur.

Six challenge portfolios provide a framework through which the GCRF targets work to achieve lasting change.