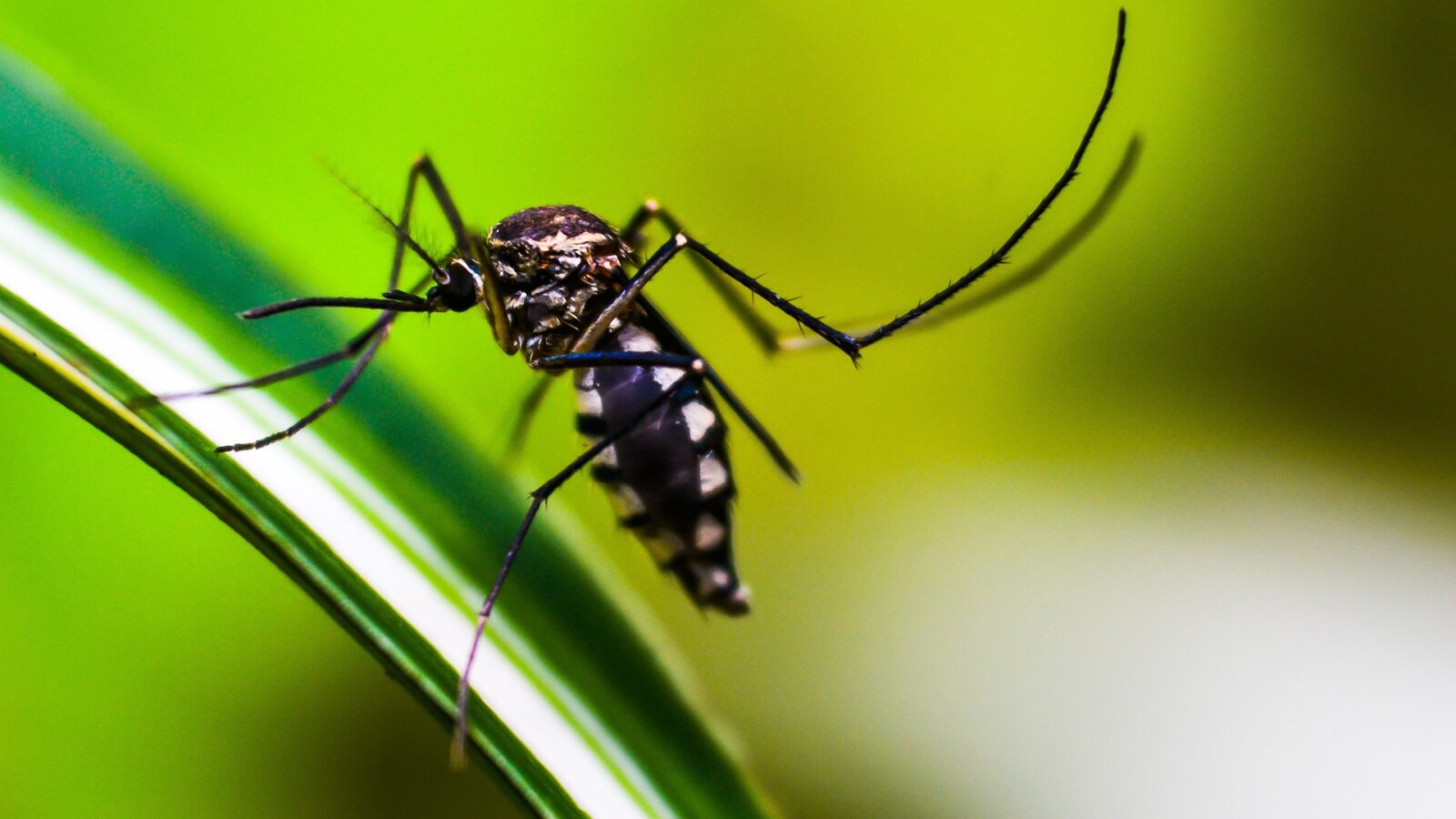 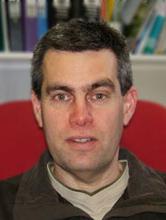 The Philippines recently declared a national epidemic after an outbreak of dengue in the country infected more than 200,000 people, causing hundreds of deaths. The mosquito-borne viral infection is found in tropical countries worldwide and can lead to haemorrhaging, organ failure and shock in severe cases.

Andrew spoke to us about the project and how the international collaboration is helping to address this urgent problem.

What are the challenges associated with the dengue virus?

As you can see from the current epidemic, dengue is a major health problem and not only in the Philippines. At least half the world’s population live in areas afflicted by dengue.

When you get dengue there is a range of possible outcomes, from a flu-like illness to a much more severe form called dengue haemorrhagic fever. There are tests available to tell if someone has got dengue, but there is no test available to predict whether a person with dengue will have the milder form of the disease or progress to a potentially fatal illness.

This means that even though most dengue cases could be managed at home, when people with dengue symptoms come to hospital, they have to be hospitalised. When there is a dengue outbreak like there is at the moment, a huge number of people go to hospital – it’s similar to when there’s a flu outbreak in the UK – but the hospitals in the Philippines become overwhelmed with dengue cases. This happens every two to three years, so it has a major impact on the health and economy of the country.

How is your Newton Fund collaboration responding to this problem?

We are working with academic institutes in the Philippines and the Glasgow Centre for Virus Research (CVR) to bring together different approaches and create a state-of-the-art infrastructure that can better diagnose patients who will develop severe disease. We’re trying to identify potential biomarkers that can be used in the future to develop a test to predict which people will progress to the more severe form of dengue illness. This has been the major focus in the field for years.

Our collaborator in the Philippines, Dr Raul Destura, is an infectious disease physician who has been collecting blood samples from patients with dengue over many years. He set up a patient cohort and enrolled people into the study so that when they were diagnosed he could collect blood throughout the course of the disease to see how it progressed. These samples were sent to us at the University of Bristol and our collaborators at the CVR. 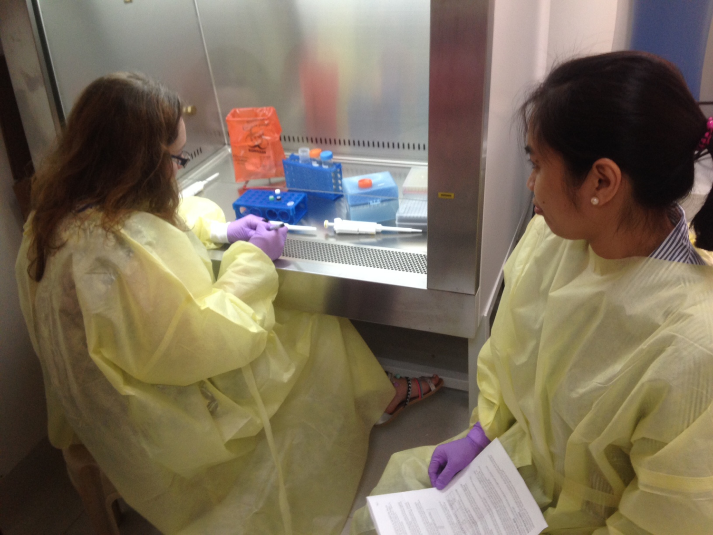 Using these samples we can investigate a number of things. Our collaborators at CVR are performing RNA sequencing to determine if there are any other viruses in people’s blood that may not have been detected previously. The severity of dengue illness could be related to people having another underlying illness that hasn’t been discovered yet. They also want to identify changes in the blood in infected patients which could predict severe disease.

At Bristol we are examining the proteins in patient serum samples using a technique called proteomics to determine if specific protein signatures could be used to predict patients who could progress to severe disease. Not many people in the virus field, particularly dengue, have carried out these large scale critical studies so we've had to develop new computational approaches to integrate and analyse the large amount of data we are producing at Bristol and the CVR.

What have you discovered so far?

Interestingly, initial findings at the CVR have shown that we can identify a number of viruses in the patient samples in addition to dengue. Some people were found to be simultaneously infected with multiple dengue strains and there may be an under-diagnosis of some types of dengue in the Philippines.

The work our collaborators at the CVR are doing, to see whether altered RNA profiles in the blood of people with different forms of dengue disease correlate with changes in particular cells in the blood, could indicate that certain cellular responses might increase the likelihood of people developing a severe form of the disease. We are now using sophisticated computing techniques to narrow down these changes in RNA profiles, to potentially develop a set of biomarkers for severe forms of dengue.

Through our large proteomic analysis of more than 150 patient samples, we’ve discovered proteins that could potentially be used as predictive biomarkers, and we’re planning to put in a patent with our partners at the CVR and in the Philippines. We are also waiting for the final steps in our RNA analysis to include these as markers for severe dengue.

Now we’re really keen to take the project to the next stage and we’ve applied for follow-up funding to validate the initial results with bigger field trials, so we can develop diagnostic tests to predict those individuals at risk of progressing to severe disease.

What is the benefit of working internationally on these challenges?

The opportunity to learn from each other. A key aspect of our project is working with our collaborators in the Philippines to develop their capacity to use high-throughput sequencing and proteomics approaches so they can respond to dengue outbreaks.

We have linked two prestigious UK universities with the leading academic institution in the Philippines. Dr Raul Destura is associate director of the Philippines Genome Centre (PGC) which is a national facility and it’s provided an opportunity for researchers from the UK to go over and train researchers in bioinformatic analysis. We have made use of the extensive expertise in viral genomics and bioinformatics at Glasgow’s CVR to provide dedicated training and workshops. This knowledge and technology transfer will support research into many other infectious disease areas in the Philippines.

At the same time we’ve supported planning for a proteomic facility at the PGC, and I’ve helped our partners select the best equipment to establish a state-of-the-art facility – enabling us to deliver future training on how to carry out the same proteomic analysis in the Philippines that we currently do in the UK. 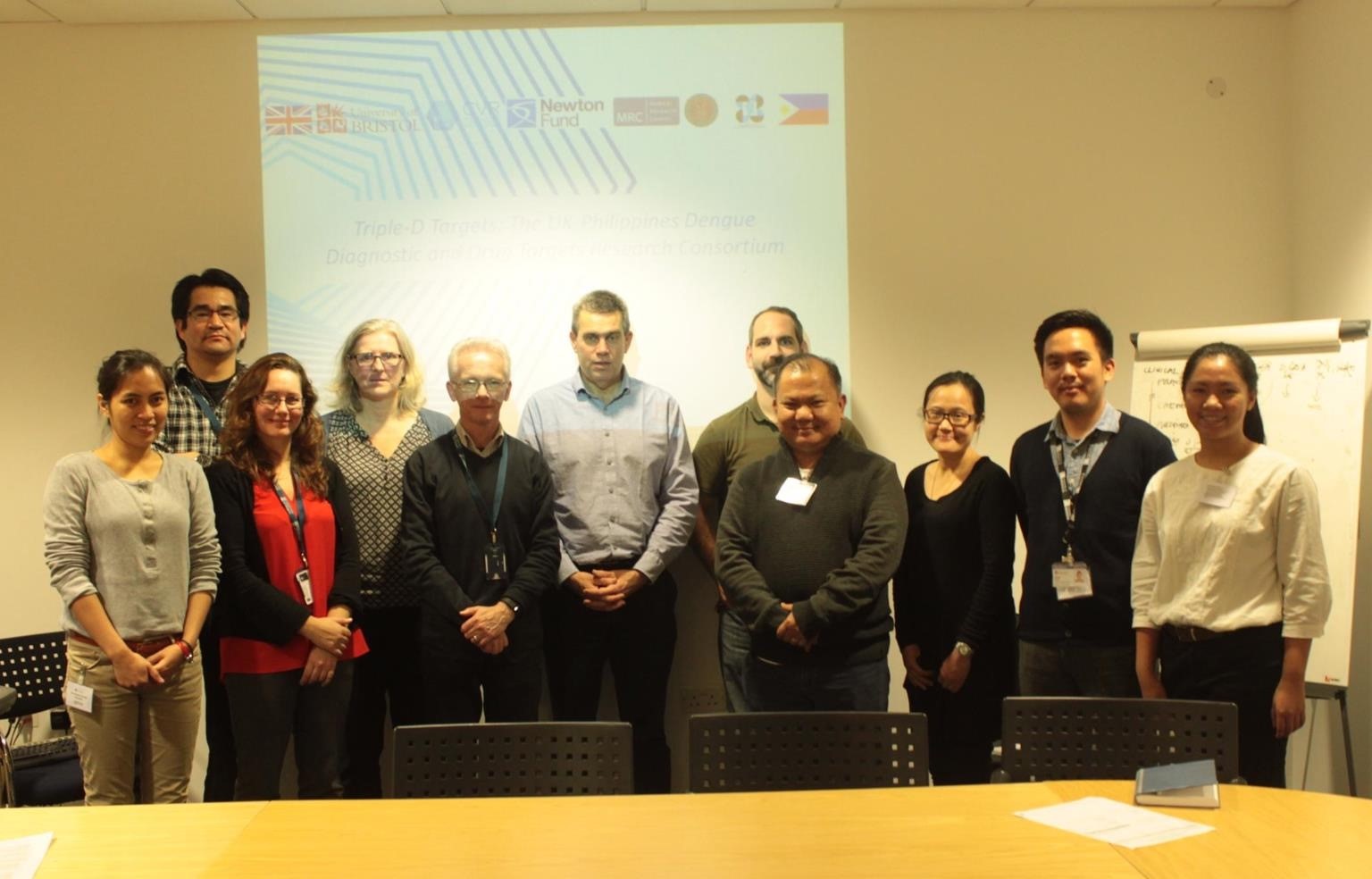 What have you enjoyed most about working on the project?

It’s been a tremendously exciting project and I’ve really enjoyed working with people in Glasgow and in the Philippines.

The only challenge is that the project is too short – it can take considerable time to establish an international project with three partners as there are situations that we cannot control, for example the collection and transfer of clinical samples. Our aim is to have a longer term commitment and strengthen the collaborative links that have been made, so we intend to apply for follow-on funding to keep our collaboration going.

Despite being set up with a relatively small amount of funding, this collaboration is one of the most interesting projects I’ve been involved in and something I want to work on long-term. I’m excited to see where the next stage of the project goes.

Dr Andrew Davidson is Reader in Systems Virology at the University of Bristol. The project, Triple-D Targets: The UK-Philippines Dengue Diagnostic and Drug Targets Research Consortium, is funded by Newton Fund through the Medical Research Council. It is one of three projects Andrew is working on funded through the Newton Fund.

Image 1: Dr Ana Filipe from the Center for Virus Research of the University of Glasgow, demonstrating the established methodologies for viral next generation sequencing to participants in the Philippines at the Philippine Genome Center, © Andrew Davidson